The evolution of Fair Isle knitting - a history

The Shetland Isles are the most northerly islands of the UK with Fair Isle being the most southern of these.  Knitting has always been important in these islands. Firstly out of necessity and then as an important trade commodity.  Read on to discover the history of knitting in the Shetland isles and about the evolution of the Fair isle style of knitting....

As with other seafaring communities around the eastern side of the UK, traditional Shetland knitting originally consisted of plain coloured knitwear.  The knitters had great skill and developed fine home spun yarns which they produced from the wool of the native Shetland sheep, a small breed which comes in many colours ranging from ecru through shades of brown to black.

The local knitters produced not only functional woollen garments but also developed beautiful lace which would be made into shawls (haps) and stockings.  Shetland lace became a prized commodity in the 19th c. and developed a reputation for quality.  Several Shetland lace haps were presented to Queen Victoria and so the demand for these fine garments grew.

On the small island of Fair Isle, a different type of knitting was developing.  Islanders started to produce patterns using 2 colours per row.  They utilised both the natural colours of the Shetland sheep and also dyed yarn using natural dyes to make deep reds, ochres and even blue.  The resulting patterns were complex and beautiful.

After the Frist World War, there was a change in the way people dressed to a more relaxed silhouette.  The demand for traditional haps was in decline so knitters turned to the fair isle style to make a living.  The Fair isle jumper became a must-have item for the fashionable set and was associated with sporting pursuits such as golf and tennis. Edward, Prince of Wales was often seen wearing Fair isle knitwear during the 1920s and 30s which helped popularise the style. 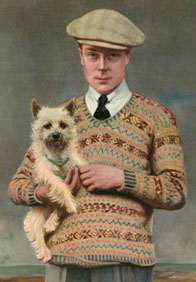 During the 1920's, Shetland knitwear led the fashion trends. With such a demand, wool was spun for the islanders in mills on mainland Scotland which not only sped up the process of producing garments but also allowed for a consistent quality and knitting gauge.

In the 1930's the industry was led by the shapes and colours of the time. Customers preferred the more natural, undyed colours of the Shetland sheep resulting in a period of brown and beige knitting.

In the 1940's fawn remained the most popular base colour and OXO patterns predominated, however there was a move to more multi-coloured knitting with different colours used in each section as islanders made use of any wool that they had.  Unlike in the rest of the UK, rationing of wool was not in force on Shetland as knitting was vital to the local economy.  However the war did effect yarn manufacturing and shipment to the Isles. This change was therefore out of necessity rather than a conscious design aesthetic.

After WW2 the Norwegian star became a popular motif. The Shetland Isles developed a close relationship with Norwegian resistance operations during the war and it is thought knitters were influenced by the Norwegian knitwear they saw.

From the 1950s finance was provided to encourage the economic development, promotion and export of knitwear from the Isles. The introduction of knitting machines helped develop new features such as decorative ribbing and the Norwegian star combined with a tree motif became popular on yokes. Newspapers and films influenced consumer taste and so knitters had to keep up with fashion changes. Patterns have always been influenced by what the islanders had to hand. This could be the pattern on a piece of kitchen lino or ceramic tile.  Colours adapted by producing garments in the 50s featuring blue motifs on grey and brighter colours emerged into the 60s and 70s.

By the 1990's, islanders themselves rarely wore the fair isle style despite the demand in the rest of the world. Today the fair isle style is recognised accross the globe and is not only knitted but printed onto everything from slippers to tea towels. In Shetland there is a new generation who now learn knitting in school.

It is thought perhaps that the heyday of the style comes from the 1920's. What is for sure however, is that the fair isle style has constantly changed throughout its history and continues to evolve today as a new generation of knitters and designers is influenced by the world around them.